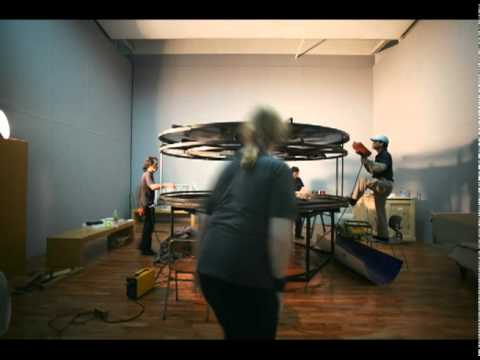 I was born a woman. I am a woman now. I will die a woman. On November 18, 2008, I had gender clarification surgery. For one year before and one year after, I took pictures of myself every week to document the subtle changes my body underwent. In total there are 1886 pictures. Only 32 have been selected for the zoetrope. Each photo is a building block. Their meaning is cumulative and at the same time presenting this in the Busan Biennale was an historic achievement. This was the second largest zoetrope in the world, over two meters high and 3 meters wide. Half a ton of steel, 250 kg of which travel at 11 km/h to produce animation as our eyes need to see 12 frames per second to form animation. I selected the form of zoetrope and flip book in order to avoid the contexts that projected image have in our society. I was also honored to be awarded Berlin women film maker for the year 2010 for this historic project.

Many portraits of transgender people are limited to “before” and “after,” the “black and white” of sex: male or female. Mostly by those who are not selves trans but rather utilizing transgender bodies as a spectacles for profit and/or entreatment. Making us “other” rather then human.these ideas reinforced by Hollywood enable violence. In order to survive many transgender people stay closeted or keep their past a secret. To fight the media troupes I explore the visual changes in my body through the process of the transition, the slight changes that span many months and, in some cases, years. The gray rather than the “black” or “white” of male or female. The genitals so many are focused on are just a tiny part of the body with only one change, however for examples my hair is a lot more interesting, changing from portrait to portrait.

Before I went to my first day of kindergarten, my father took me to buy a new pair of sandals. The pair I wanted was red with gold buckles, made for girls. I remember how hard the store clerk tried to talk me out of them, but I was adamant– that was the pair I wanted. The next day in school, the other kids were relentless in their taunting. I went home in tears. My father proceeded to use brown shoe polish to cover up the red. These types of gender enforcement’s grow more and more violent and systemic as we grow older.

Becoming is a straightforward look at gender affirmation. I offer a direct look at the reality of my body during this process, in contrast to idealized male and female bodies and identities. So much of the media we see day-to-day presents airbrushed, idealized stories and focuses on making products seem appealing. I want you to come to your own understanding about gender. By using actual prints and old technology it is my hope to help focus the viewers eye on what is actually there. Avoiding the context of “unreal” projected images have. Being unapologetic about my naked womanhood is a big part of the message, there is nothing to be ashamed off in my amazing body that carries me in life.